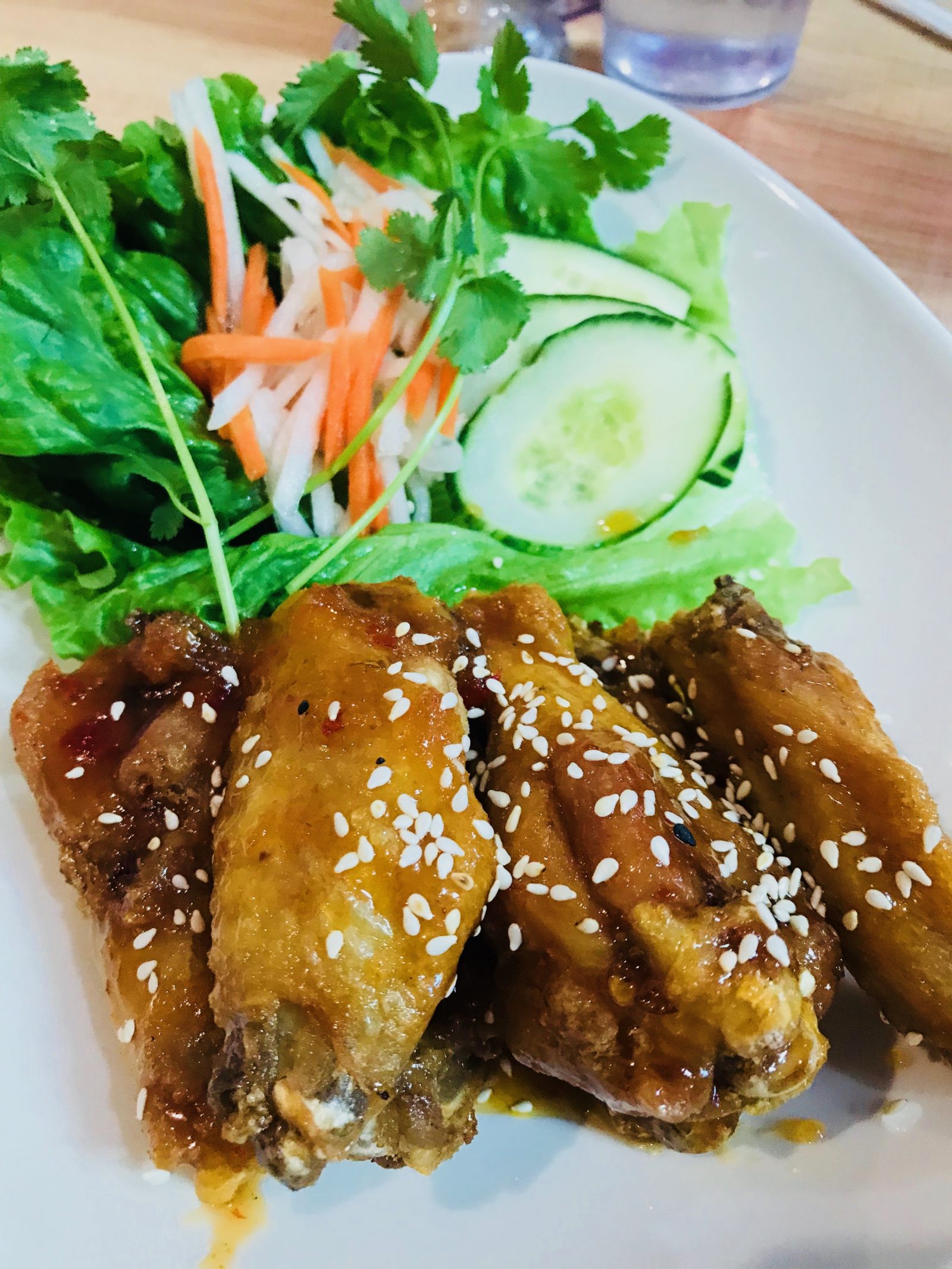 The grocery store anchored strip mall more often than not is hiding some true culinary gems.  This week I am going to inform you of another such spot that is just off Carefree Highway. The Vietnamese restaurant is serving some delicious and authentic dishes as well as offering a few from other regions with their own twist.  The restaurant is open and bright with a central fountain for ambiance. There are a few larger tables to accommodate a large group; similar to the one I had with me on this visit.  While the emphasis is Vietnamese dishes such as Pho and Curry dishes, I was thrilled to see some other items that work well with the main direction of the menu.

We started out with an appetizer order of Chicken Wings ($7).  The wings were nice and crispy from cooking and then glazed in a very flavorful Tamarind glaze.  The glaze gives it a sweet Teriyaki like flavor, but not as strong.  They finish the dish off with a sprinkle of toasted Sesame seeds and a small side salad.  If you like chicken wings, you may want to give this version a try, as they are unique and satisfying.  It would also be a good dish for someone that may want a smaller entrée on his or her own.

The next appetizer we ordered was the Vietnamese Crepe ($9).  This crispy flour crepe almost looks like a large omelet. It is filled with pork, shrimp, green onions and bean sprouts.  It is a little denser than a traditional crepe but is still full of flavor.  It is once again served with another side salad, but also some fish sauce for added flavor.  The size is easily shared amongst a group of four to six people and when combined with another appetizer like the chicken wings, starts the meal off on the right direction.

We decided to try a few different style entrees to really get an overview of the menu. The first entrée we ordered was Vietnamese Curry ($9).  This spicy yellow curry soup is filled with chicken, potatoes, carrots and taro.  It comes in a large bowl and is accompanied by a smaller bowl of white rice.  This dish has some heat, although it is a slow building heat on your palate.  If you are a fan of spicy dishes it may not be as hot to you, but to a neutral heat kind of person, such as myself, it was strong.  That being said, overall, the dish was very good.  The vegetables were cooked perfectly as was the chicken.

The next entrée was the Seafood Pho special ($10.50).  Pho is a soup that is broth based with rice noodles, various herbs and traditionally a protein.  In this case the protein was various seafood items.  Another large serving bowl, this one came with extra herbs and rice noodles to add to the dish if desired.  The heat level was noticeably lower, and the seafood added an additional flavor.  They have several different proteins to offer with their Pho dishes, including fried tofu if you would like.

The next dish was the Combo Beef noodle bowl ($11).  This has a base of cooked rice noodles that are then topped with shredded lettuce, carrots, cucumber, and bean sprouts.  You can choose from a list of different proteins to be added on top of all the other ingredients.  It is then finished off with a scoop of peanuts for added flavor and texture. The combo meal version, which we ordered, also comes with two small egg rolls.  While the other dishes we had seen thus far had been all mixed together in a broth or soup, this does not have that extra component.  You may also have some difficulty mixing all the ingredients together as the bowl that it is served in is packed tight with ingredients. You may need to eat your way through some of the toppings to get to the noodles.

The next dish was the Tangerine Chicken ($9).  This is very similar to an Orange chicken dish that you may see at other establishments, but only in concept.  The sauce is much lighter and has stronger natural orange flavor as opposed to orange syrup that you find at other places.  The pieces of chicken were lightly breaded and then fried.  It is then sautéed with onions and a caramelized tangerine sauce.   It is served along side steamed broccoli and white rice.  They also give you a small lettuce salad with tangerine segments to round out the dish.  This is a wise dish to order if you are unfamiliar with Vietnamese cuisine, as it strongly resembles a dish from more mainstream Chinese restaurants.  This is a much lighter and fresher version and I was amazed at the flavors that they were able to get from the tangerine sauce.

The next entrée was from the safest section of the menu for the non-adventurous eaters of the world.  The Grilled Chicken Rice Plate ($9) is just as it sounds.  A plate of rice with grilled chicken is exactly what you will receive.  You do get a small side salad just to freshen up the plate some, but mainly it is chicken and rice.  The chicken is cooked with a nice char but leans toward the more bland side, since it is only seasoned with salt and pepper.  There is the option for a side dish of soy sauce or fish sauce.  I would recommend adding a little bit of flavor, unless simple grilled chicken is what you are looking for.

The final entrée of the evening was the Stir Fry Beef with Curry ($10.50).  This dish starts with thinly sliced beef that is then sautéed in a yellow curry sauce with a bunch of delicious vegetables.  In the mix are mushrooms, onions, carrots, celery, bell peppers and broccoli.  It is garnished with some fresh herbs and served with a scoop of white rice.  This dish had some heat to it like the other curry dish, but again heat level on a palate is very subjective.  It was a very filling dish and full of great fresh vegetables.

It is always great to have alternatives, especially in a small community area, other than drive thru options.  I also am thrilled when the options span different culinary regions.  They have quite a few tables for in restaurant dining, but I noticed they also seem to do a thriving take out business too.  This spot is for real and I am not just being Pho-ny.