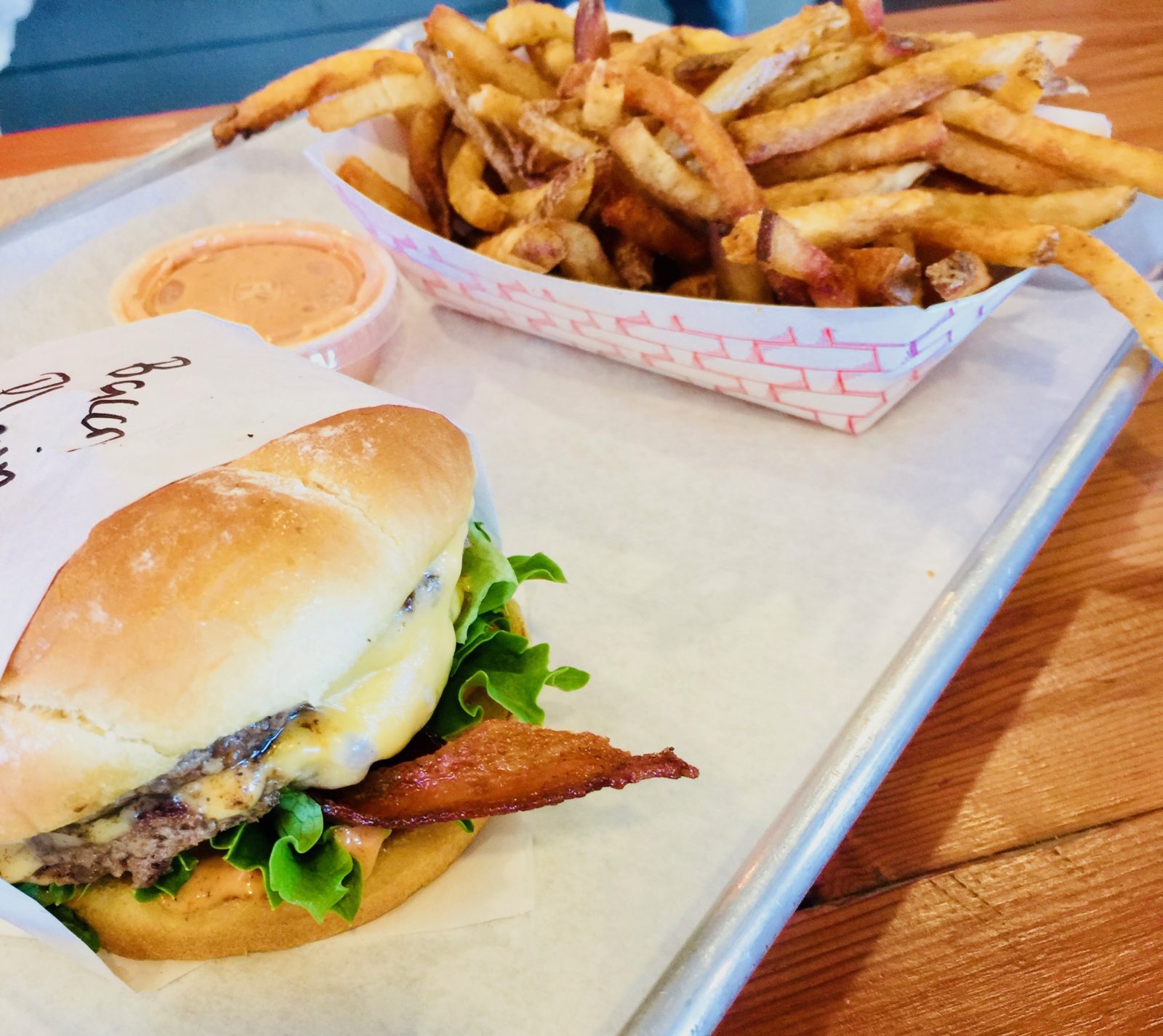 This week I am going to tell you about a place with two locations.  Each location has a unique flair all to itself.  While a few menu items are served at both locations, the Scottsdale location also offers a few more items to round out the menu. They both cook amazing burgers and have been recognized locally and nationally as having the best in town.

The Arcadia location is slinging burgers, French fries and drinks only.  In this small spot, right on Indian School road you are going to find yourself possibly waiting on a line in order to get your hands on one of these precious burgers.  The tables are open seating, after you have ordered at the counter.  Even though they only have burgers and fries, there are a number of toppings to add in order to make it your own.  Toppings such as cheese, butter caramelized onions, thick-cut bacon, roasted Jalapeno peppers, or even a gluten free bun.  Each burger starts off as 100% in house ground chuck beef that is cooked perfectly.  They then add a fresh slice of tomato and onion, some crisp leaf lettuce, and slices of kosher dill pickle.  They finish it all off with some of their homemade Stand sauce, which is similar to Fry Sauce in the Midwest or Thousand Island dressing without the pickles mixed in. You can subtract any of the included items when placing your order.

At the Scottsdale location they have the same exact menu with some added items.  Also at this location, you will be seated at a table and then will have traditional tableside ordering service.  The added menu items include small street tacos as well as Hot Dogs, Salads and some starter items.  But the burgers, fries and milk shakes are given the same attention to detail at each location.  While the Arcadia location has a quick roadside/beachside feel, Scottsdale feels more like a low-key restaurant.  If you are in the mood for the staples either location is great.  I visited both in order to experience the entire menu.

We started with the Standard burger ($5.69).  All burgers are served with two patties automatically.  On this burger we chose to only have tomato, ketchup, pickle, and lettuce.  While two patties sound like a lot of meat, it is a really thin patty.  So in essence it probably is less than or equal to a quarter pound of total meat on each burger.  The bun had a nice texture and held together easily during eating.  The burger comes served wrapped in a paper wrapper, which helps to keep it all together and may even assist if you wanted to eat it on the go.

The next Standard Burger ($7.94) that we ordered we added on cheese and the thick cut bacon.  We decided to build it with the lettuce and house sauce only.  The cheese is melted perfectly over the patty and the bacon added a little extra flavor punch as only bacon can.  We also added on the House cut French Fries ($2.99) with the house sauce on the side.  The fries are cooked well done and extra crispy, so if you like them cooked a little lighter be aware.  You get a huge helping of fries for the money and one order is plenty to share as long as you aren’t with a French fry glutton.

On another occasion we went to the Grand Stand in Scottsdale to sample some of the other menu items that are not available at the Arcadia location.  We did order two items that are located at both locations and that was two of their hand-spun Milk shakes.  Upon sitting down we decided to also have a starter item to get the meal going first. We selected Handmade Chips and Guacamole with salsa ($7.85).  The chips were a light crispiness and there were three different salsas to choose from as well as the guacamole for dipping.  All three of the salsas had a good helping of cilantro, but different degrees of heat.  The guacamole had a little cilantro, but an overall creaminess that it wasn’t so evident. We also had an order of Mexican street corn ($4.35) that you could choose to have on the cob or removed from the cob for you.  It comes with diced onions and cilantro sprinkled on top of the cob or mixed in with the kernels of corn.

We ordered from the tacos section of the menu next.  We were told that the tacos were the small street vendor style, thus we picked one of each to try.  The first was the Vegetable taco ($3.15); this is a white corn tortilla that is topped with seasonal vegetables (squash and zucchini on this visit), with a Quinoa and Black bean mixture, pickled red cabbage and red onions, and fresh cilantro.  The mixture was nice, but it was a lot of red cabbage on this taco.  The next taco on that plate was the Chicken taco ($3.45), which starts with the same size white corn tortilla.  Then it is topped with tender roasted chicken and a Cotija and Queso cheese mixture. This taco had a nice mild flavor and the mixture worked perfectly.  The next taco was the Short Rib taco ($3.75); the tortilla is topped with braised short rib that has been slow cooked with some extra spices.  The meat is then topped with the same cheese blend as the Chicken taco and some of the pickled red cabbage that was on the vegetable taco. The amount of cabbage was more fitting on this taco but the meat mixture had some kick to it, so be forewarned. The last taco was the Taco al Pastor ($3.95).  This taco had slow roasted pork with roasted pineapple, the Cotija and Queso cheese blend. The pork had been roasted perfectly and the added sweetness of the pineapple rounded out the flavors.  I highly recommend the Chicken and Taco al Pastor if you only want to pick two, but the Short Rib is a close runner up. They do offer a taco combination that you get to select any two tacos.  It comes with a small guacamole, sour cream and some of their Charro beans for a small price ($10.85).

The last item that we ordered was the All-American Hot Dog ($9.85).  This is a super large hot dog that can be topped with a large number of toppings and served with a scoop of French Fries.  The bun for the hot dog is a Pretzel bun that adds to the flavor.  It is a 100% beef hot dog and you can add relish, ketchup, mustard, and even diced onions if you choose.

We followed up the food with two of their hand-spun Milk shakes. They have the classic vanilla or chocolate ($5.00) or you can choose from their specialty shake section for just a little more money ($.85).  We selected a Salted Dulce de Leche ($5.85) shake and a Banana Stand ($5.85) milk shake. The salted Dulce de Leche is a vanilla ice cream shake with caramel that is applied to the inside of the cup as well as being added to the shake mixture while being swirled together.  The Banana Stand shake also starts with a base of vanilla ice cream with a banana cream like pudding on the sides of the cup then some crushed banana pieces all blended together with the mixture.  Both shakes were delicious and I will be craving the Banana Stand in the coming summer months.

If you are looking for low frills, fresh ingredient meal then head to either location.  The Arcadia location has a drive thru for ease and efficiency and a covered out door patio section for the cooler months of the year.  The Scottsdale location has a covered patio and a more expanded menu. So at either location you have some added benefits to pick from.  The food is full of flavor and low cost for the amount you get.  So unlike J. Wellington Wimpy from the Popeye comic strip would say, you won’t have to pay them Tuesday for a Hamburger today.