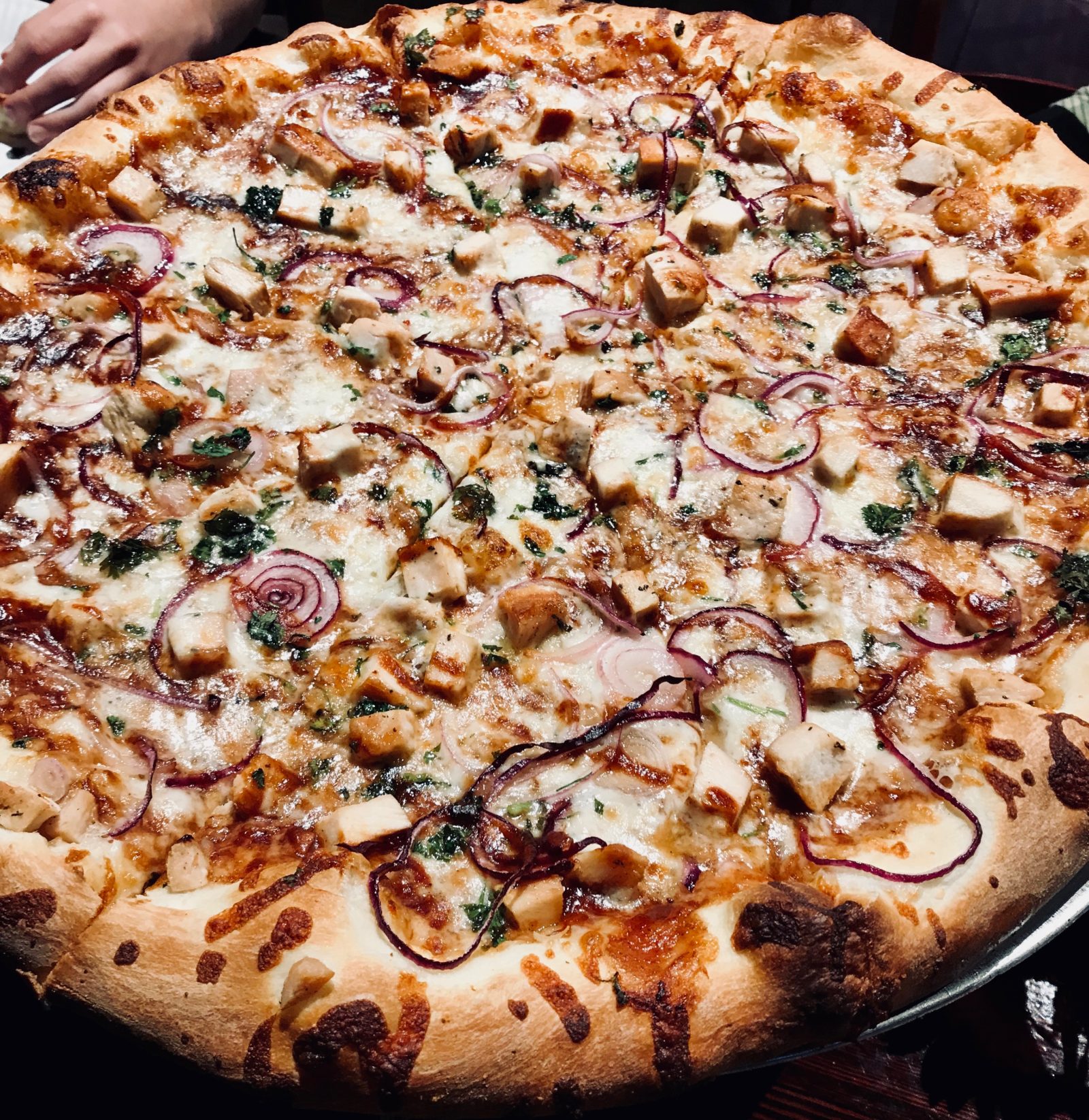 Pizza is an item that seems to have certain followings for different tastes. Chicago has the deep-dish or casserole style and New York has Pizza. The traditional hand tossed pizza is what most of the dining world picture when people say Pizza. Then there is the California style of artisanal pizza, which has aspects of the hand tossed with more of an emphasis on a range of ingredients. Giant Rustic Pizza is celebrating the artisanal style and adding an extra twist. The sizes of the pizzas are formulated with sharing in mind. There are two sizes available 14 inch and 20 inch. The larger of the sizes feels tremendous and you can feel that it could easily feed 4 or more people. They have a range of different pizza creations as well as traditional cheese. You can also chose from a variety of other items such as salads, wings, calzones and sandwiches. The menu has a good variety for all different tastes, but the pizzas are eye catching for sure.

We started the meal with the Garlic Cheese Blossom ($7.95). This is a round circle of dough that has been covered in a generous helping of garlic and then on the top a golden crust of cheese. It is cut into eight pieces that you can pull apart with some effort. There is a cup of marinara for dipping if the patron is inclined. The garlic while not overwhelming is definitely detectable in all bites. The slices from the center of the blossom have considerable more cheese than the edges. A nice starter dish to share with a table, but may be a bit much for just a party of two.

The next item we ordered was the Oven Roasted Chicken Wings (7 for $6.95 or 13 for $12.95). The wings are oven roasted, not fried which gives them a great flavor and texture. You can order them without sauce or with a dipping cup of sauce. Each order also has either Ranch or Blue Cheese dressing for dipping. We decided on the BBQ Citrus Chipotle sauce, and it was a perfect pairing with the roasted chicken wing.

We also ordered two salads from the menu. The first salad was the large size House salad ($7.95). It is a lettuce blend that is topped with shredded carrots, diced tomatoes and sliced cucumbers. You can choose from a number of different dressings. The next salad was the All American Salad ($9.95). Once again a blend of lettuce, but this one is topped with roasted Turkey breast slices, sliced cucumbers, diced tomatoes, a large helping of Blue Cheese and a large scoop of dried cranberries. Both salads are served in a plastic container, whether you are dining in or taking out. It makes it convenient for any left over salad, but also you could add your dressing on top of the salad, close the lid and while holding the lid tightly closed, shake to mix the salad up. The special creation salads only come in a large size but you can order a Caesar or the House salad in a smaller size ($3.95). The amount of toppings for the salads are generous, but there is also a large amount of lettuce mixture, so if sharing, make sure to try and divide up the toppings while scooping out the salads.

We then turn to the pizzas. The first pizza was the 14-inch size pizza. We selected half cheese and half of the Slaughterhouse style. That combination brought it to a price of $14.45. A 14-inch cheese would have been $11.95, while a 14-inch Slaughterhouse would have been $16.95. The Slaughterhouse is aptly named as it comes with a lot of different meats piled on top. The meats that you will find in abundance are diced bacon, Canadian bacon, sliced sausage, slices of salami, and pepperoni. It is piled high on the pizza, and has plenty of coverage on every slice. The crust was denser toward the end and thinner toward the center which is a hallmark of the artisan style pizzas. The 14-inch size would feed 2 to 3 people with ease.

Then came the Giant Pizza to the table. When you see this crossing the room it is hard not to stare in wonder. My mind immediately wondered the skill it took just to remove it from the stone hearth oven. We decided from the vast options to choose the Malibu Chicken pizza (20-inch for $21.95). It is the same delicious crust, which is then topped with a tangy and slightly sweet BBQ sauce. The olive oil base, allowed the pizza to have all the ingredients shine and mix together perfectly. With the generous application of BBQ sauce and then topped with roasted chicken pieces, red onion, and cilantro with a shredded Wisconsin Mozzarella cheese tying it all together. The pizza is sliced in the traditional manner of pie shaped slices, and each slice is big. This is a great pizza for a family or group to share. The large slices will make New York transplants nostalgic and remind them of the large corner pizzeria style slices from their East Coast days. Another great feature is the cooking inside the stone hearth which allows for each pizza to have slight crust variations and not be as uniformed as you would see in the large conveyer belt pizza restaurants.

The inside of the restaurant has generous seating including a few sections set up into large group dining. As you come into the restaurant you will order upfront for either dine in or take out and then go grab a table if you are going to stay and eat. The items you order will be delivered as they become ready and you will be able to refill your own drinks and get as many plates as you might need for the meal. Every person has a favorite pizza style/place and I personally love pizza in general. It is nice to have a few different options available so that on any given time, you have the advantage of variety close by. It is also nice if you need to feed a group of Football Offensive Lineman, you can throw down a Giant pizza and slowly and quietly leave the room.